You are here: Home > About > Board of Directors > Board: John Radcliffe 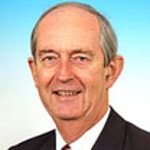 Dr John Radcliffe, an Honorary Research Fellow in CSIRO, is currently Secretary of the South Australian Division of the Australian Academy of Technological Sciences and Engineering and a Trustee of the AW Howard and Farrer Memorial Trusts. He is former Commissioner of the National Water Commission, and was previously Deputy Chief Executive of CSIRO responsible for Divisions in the ‘Natural Resources Alliance’ (Plant Industry, Land and Water, Marine Research, Wildlife & Ecology, Entomology, Atmospheric Research, Forestry and Forest Products). Prior to that, he was South Australian Director-General of Agriculture.

He has been Chairman of the Commonwealth Department of Agriculture, Fisheries and Forestry Eminent Scientists Group which reviewed import risk assessments. He was a member of the Council of the University of Adelaide for eight years until September 2014.

Dr Radcliffe has served on numerous Cooperative Research Centre boards and was Visitor to the CRC for Plant Based Management of Dryland Salinity. He served as Project Director for the ARC-sponsored Australian Academy of Technological Sciences and Engineering studies ‘Pesticide Use in Australia’ in 2001-2 and Director and author of ‘Water Recycling in Australia’ in 2003-4. He chaired the Research Advisory Committee of the Australian Water Recycling Centre of Excellence from 2011 to 2016.

Among numerous other appointments, Dr Radcliffe has been a member of the SA Arid Areas Catchment Water Management Board; Chairman, Executive Council, CAB International [Wallingford, Oxon.]; and Chair of the Board of the South Australian Research and Development Institute. From 1985 to 1992, he was involved with establishing the Murray Darling Basin Commission, being an SA Deputy Commissioner and Commissioner. Dr Radcliffe was a foundation Trustee of the History Trust of South Australia from 1982 and its Chairman 1987-1990.

Dr Radcliffe is Chair of the Crawford Fund’s South Australia Committee and a member of its Board of Directors.