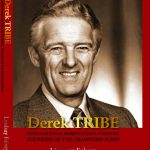 “Derek Tribe was a gentleman and a scholar – and a visionary. He was the internationally renowned agricultural scientist who founded the Crawford Fund.”

So began the speech by The Hon John Kerin, the Fund’s chairman in launching a biography of Derek by Professor Lindsay Falvey, at the Fund’s 2012 conference.

John went on to highlight Derek’s many achievements and recount his memories of being lobbied as a Federal Minister, noting the success of Derek’s philosophy of ‘doing well by doing good’ by supporting international agricultural research.

John noted the biography “Derek Tribe: International Agricultural Scientist, Founder of the Crawford Fund” not only informs us of the man and his work, his dedication and his modus operandi, it also gives us a remarkable insight into the founding of the international agricultural research system, pre and post World War II, and of the founding of the Crawford Fund 25 years ago.

The book explains the genesis of the Crawford Fund and, as John (a then senior politician) notes “It is absolutely fascinating how he did it and when I look back on it and now that I know so much more about Derek and the way he worked, we were putty in his hands. To come to grips with how it was carried out requires reading the book.”

John’s conclusion indicated the legacy that Derek left behind: “We in the Crawford Fund, now 25 years old, can only hope to share this vision and continue Derek’s vision of ‘Doing Well by Doing Good’- the title of yet another book he wrote. We still believe that expenditure on agricultural research is one of the two best ways to assist the poorest nations on the planet.”

The book launch in Canberra was attended by Derek’s wife, Elizabeth and his daughter Jane, as well as Jan Jones, who worked for Derek through many of his years at the University of Melbourne and all his year’s at the Crawford Fund.