You are here: Home > About > Board of Directors > Board: John Kerin 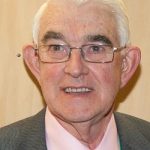 The Hon John Kerin AM
Chair, Board of Directors, Crawford Fund

Born in Bowral, New South Wales, where he worked on the family farm, John Kerin is an Australian economist and former Labor politician. He worked at the Australian Bureau of Agricultural and Resource Economics (ABARE), before being elected to the Commonwealth Parliament as Australian Labor Party member for Macarthur in 1972. He lost his seat in the Labor defeat of 1975, and returned to ABARE, before being re-elected as member for Werriwa in 1978, following the retirement of Gough Whitlam.