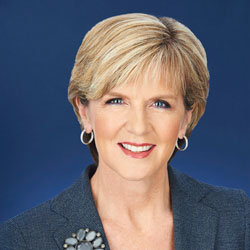 Julie Bishop is the Minister for Foreign Affairs in Australia’s Federal Coalition Government. She is also the Deputy Leader of the Liberal Party and has served as the Member for Curtin in the House of Representatives since 1998.

Minister Bishop was sworn in as Australia’s first female Foreign Minister on 18 September 2013 following four years in the role of Shadow Minister for Foreign Affairs and Trade.

Minister Bishop has overseen the single largest expansion of Australia’s overseas diplomatic presence in 40 years, introduced the New Colombo Plan to support Australian undergraduate students to study and undertake internships in the Indo-Pacific region, and established the innovationXchange within the Department of Foreign Affairs and Trade to develop bold and creative solutions to long standing development challenges.

She has strengthened Australia’s key strategic and economic relationships and enhanced Australia’s engagement with Pacific Island countries, including normalising relations with Fiji, leading international recovery and reconstruction efforts in Vanuatu and establishing a school of government in Papua New Guinea.

Minister Bishop promoted Australia’s interests at the United Nations Security Council, playing a lead role in the international response to the downing of Malaysian Airlines flight MH17 over Ukraine for which she was awarded the Commander of the Order of Merit of the Netherlands Ministry of Foreign Affairs, in 2014.

Minister Bishop has also served on a number of parliamentary and policy committees including as Chair of the Joint Standing Committee on Treaties.

Before entering Parliament Minister Bishop was a commercial litigation lawyer at Perth firm Clayton Utz, becoming a partner in 1985, and managing partner in 1994.