The Crawford Fund now hosts the Researchers in Agriculture for International Development (RAID) Network – the Australia-based network that brings together early to mid-career researchers with an interest in agriculture and international development. Most of our conference scholars and student awardees go on to be members of RAID if they haven’t already found the network.

Each year a succinct summary of our conference is distributed within a few days of the event. This initiative is delivered by our Keynote Listeners who play an integral role in summarising and communicating the key take home messages from the event.

Our Keynote Listeners come from the RAID Network and at our annual conferences, RAID members also assist us with our scholar activities, mentor some of the scholars and, this year, we have three speakers from the Network – Madaline Healey, David McGill and Anika Molesworth. 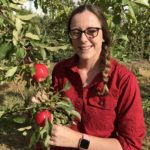 The 2022 Keynote Listeners are:

Jessica Fearnley, who is on the central committee of RAID. Jessica received a Crawford Fund student award for her research in Cambodia and is now a Development Officer for Temperate Fruits at the NSW Department of Primary Industries.

David Gale is an ACT RAID representative and former Crawford
Fund awardee. He attended his first Crawford Fund Conference in
2009 and since then has been a conference scholar, scholar mentor
and conference speaker. He is the RAID representative to the ACT
Crawford Fund Committee and has organised the conference
scholar networking event each year. David has a Master of
Philosophy undertaking a project investigating the way in which certain composts act to ameliorate acid sulphate soils in Vietnam’s Mekong Delta and was a Crawford Fund IRRI scholarship awardee in 2013.

We can look forward to the Keynote Listeners Report within a week of the event!