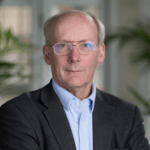 Charles Godfray is a population biologist with broad interests in science and the interplay of science and policy. He has spent his career at Oxford University and Imperial College and is currently Director of the Oxford Martin School and Professor of Population Biology at Oxford.  His research has involved experimental and theoretical studies in population and community ecology, epidemiology and evolutionary biology. He is particularly interested in food security and chaired the UK Government Office of Science’s Foresight project on the Future of Food and Farming and is currently chair of the UK’s agricultural and environment (Defra) ministry’s Science Advisory Council.

Can we feed the world without wrecking the environment?

It is now over two hundred years since Malthus pessimistically predicted demand for food would inevitably outpace our capacity to produce it. Over these two centuries the goal of feeding the world sustainably has seemed elusive, and even receding as we understand the threats posed by global warming and other types of environmental challenge that John Beddington so memorably called the “perfect storm”. But there are grounds for hope. Population growth rates are decelerating as more countries go through the demographic transition. We can now imagine a future where humanity’s demands of the earth plateau or even decrease. But at that plateau there will be billions more people needing to be fed than exist today. The talk will argue that it is possible to feed this number of people without despoiling the environment, but only if we make hard decisions today. We require a new revolution in agriculture of the same magnitude as the industrial and green revolutions that not only boosts productivity but also radically improves resource-use efficiency and sustainability. We need to reduce waste across the food system. We need to make hard decisions about diets and consumption patterns. And we need to accept globalization and refashion a globalized food system that provides public as well as private benefits. These ambitious goals are attainable – it’s game on – but only if we understand the risks and the challenges and build the political will to act.